Are you ready to meet the BODY SNATCHERS?

Did you know Dr. Jekyll and Mr. Hyde has connections to reality? The house, at least, was based on the home of Dr. JOHN HUNTER. The rest of the story? Well…

The world of surgery and anatomy in the 18th century offered bloody dealings of all sorts. It’s murky, its macabre, it involved digging up bodies in the middle of the night. From public hangings, to secret expeditions in dank churchyards, to gruesome human dissections in pungent attic rooms, The Knife Man will give you a whole knew understanding of medicine’s bizarre history. Tonight we discuss the book that started it all–AND we’ll get to talk about Wendy Moore’s latest: Endell Street: The Women Who Ran Britain’s Trailblazing Military Hospital!

What’s more, the first 100 to enter will have a chance to win a signed copy of ENDELL STREET, along with other fantastic swag from the Peculiar Book Club! Don’t miss the chance to ask your burning questions about removing bodies from cemeteries the proper way, or the different ways of anatomizing a human (or any number of other critters!)

In true book-club style, you will meet the author and participate in the discussion–so come with questions! Join us, too, for the PopCult Quizzer with host Davey Berris, where science fact meets science fiction. Livestream on Aug 12, Thursday at 6 PM EDT. Donations requested for tickets to support books and authors that even a mad scientist would be proud of!

Wendy Moore’s kaleidoscopic rendering of John Hunter and his times — refers to “The Father of Modern Surgery.” As it turns out, Hunter’s paternity ranged a good deal more widely. Moore is to be forgiven for the omission, as an all-inclusive subtitle would have to read “The Father of Modern Surgery, Experimental Biology, Artificial Insemination, Early Evolutionary Theory, Taxidermy and Dental Implants” and then there’d be no room for the striking Rembrandt cover painting of a cadaver dissection.

Sample Discussion Questions for the BOOK!

2. John Hunter is revered by many as a brilliant surgeon, a superlative anatomist and a great scientist but also criticised by others for his nefarious deeds – his involvement with the bodysnatchers and obsession for collecting human and animal parts. Was he a hero or villain?

3. John is often compared and contrasted to his older brother William – also a famous 18th-century doctor. How were they alike and how different?

4. How and why did Hunter become involved in bodysnatching? He is said to have dissected several thousands of bodies, most of them stolen from graves. To what extent did the ends justify the means?

5. Did he at times overstep the mark – eg with his determination to obtain the body of The Irish Giant? Experimenting on himself in his quest to understand venereal disease? Vivisection?

6. How did you get under Hunter’s skin in order to understand his world? (I visited a dissecting room)

7. Hunter taught some 1000 pupils from the UK and America including Edward Jenner, pioneer of vaccination. Why did they flock to him and how did they spread his ideology?

8. Hunter and his wife, Anne (nee Home), seemed to have had a harmonious marriage despite being very contrasting characters. She was a poet, socialite and intellectual. What was their household like? How did she cope with bodies being delivered at their back door in the night?

9. At one point Hunter apparently attempted to revive a man – the Rev Dr William Dodd – who was hanged at Tyburn. Did Hunter really believe he had power over death itself?

10. Towards the end of his life Hunter was absorbed in the question of how life on earth began. How did he contribute to ideas about evolutionary theory? 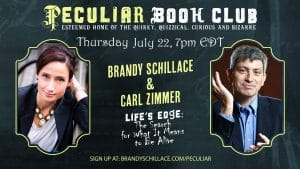 WHAT DOES IT MEAN TO BE ALIVE? Join host Dr. Brandy Schillace for a book club date with Carl Zimmer, author of Life’s Edge: The 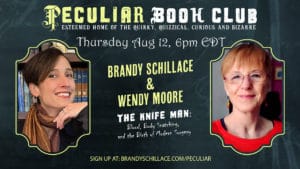 Are you ready to meet the BODY SNATCHERS? Did you know Dr. Jekyll and Mr. Hyde has connections to reality? The house, at least, was 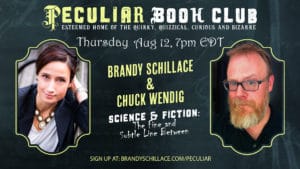 Wanderers, Book of Accidents, and the Murky Line between Science and Fiction Tonight our 7pm show brings on author, comic book writer, screenwriter, and blogger