Author. Historian. Adventurer at the Intersections.

I grew up in an underground house, next to a graveyard, in abandoned coal lands… with a pet raccoon. Oddly, this tends not to surprise people as much as I think it will. My rural community skirted the poverty line, a place of failed industry and orange rivers, poor health, and poorer access to healthcare. As a result, I spent my childhood reading a lot about disease and going to a lot of funerals. I ended up with a Ph.D. and a career in science history, which is probably a likely thing to happen when you spend your early years in a cemetery.

I’ve worked in an English Department, a History Department, and for a Medical Anthropology journal. I spent five years as a research associate in a medical museum among amputation saws, surgery kits, and smallpox vaccines—and now, in addition to being an author, I’m Editor-in-Chief for BMJ’s Medical Humanities Journal. I tend to fall outside the borders and binaries on every side.

I always liked the line by Walt Whitman: I contain multitudes. Each of us are completely unique sets of data and DNA, blood and bones, bits and pieces of ancient stardust (and some microplastics). We don’t just have fingerprints. We are fingerprints — completely unique phenomenon in the universe, never before and never to be again. I am a truck, a train, a bulldog in a wind-tunnel; I’m also autistic. I live in the middle spaces where the contradictions are, containing bits of astral matter, aspects of both genders and possibly some dragons and vampires. I do history the way most people climb mountains–I get my hands dirty–I end up in catacombs, archives, basements. As you can imagine, this sort of thing doesn’t fit in a box very well. Then again, life is more interesting at the intersections.

***Addendum on that pet raccoon… She eventually figured out how to open the fridge. It was a whole thing. 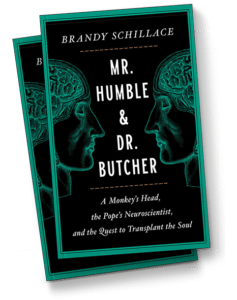 Brandy ON AIR on NPR with host Tonya Mosley

Coronavirus Has Reshaped Funerals — And How We Mourn Lost Loved Ones